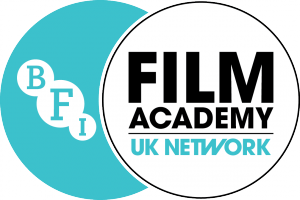 Saturday saw the premiere of the MTR BFI Film Academy films at the prestigious NFT1 at the Southbank. The young film makers screened their films in an arena which has hosted the biggest films in cinema history including ‘12 Years A Slave’ soon to be shown at the BFI. The participants organised the event themselves and it was hosted by Stacey Duah, the 1st assistant director for their drama ‘I Trust You’. 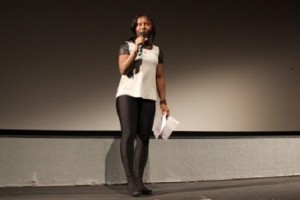 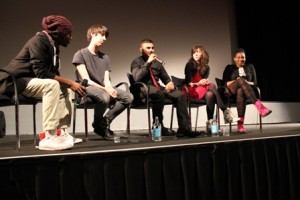 There was an amazing turnout with a huge audience made up of family, friends, industry guests and Film Academy mentors. First up was  a behind the scenes documentary of the MTR BFI Film Academy project followed by the 2 short films they had produced: the drama ‘I Trust You’ and the documentary ‘Underage Tattoos’ . To follow was a Question and Answer session about the participants experience. The panellists, Riad Ahmed, Jessica Hilario, Ka-miller Reid and Conor Powell, took to the stage in the NFT1 (which has previously seen the likes of Martin Scorsese and Helen Mirren) answering questions about their experience on the course from MTR co-facilitator Sanchez Roberts and the audience. This was followed by the handing out of certificates to the participants and saw a special award given to Brandon who was too young to be part of the project but is a rising star at Mouth That Roars and helped out when needed. 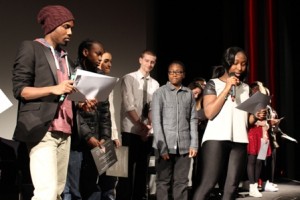 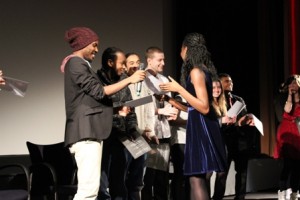 But that wasn’t all, the event ended on a high as the audience were treated to a further film the satirical musical ‘Chicken Shop’ made by MTR Filmmakers.

The after show party was held in the Blue Room to celebrate the filmmakers achievement and to say thank you to everyone that had supported them in the project. 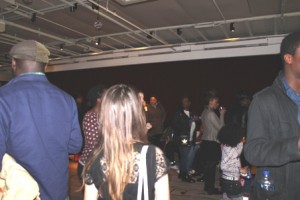 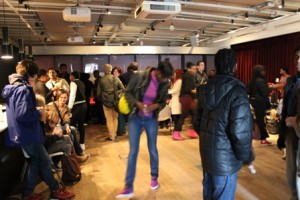 Gaetan Cal and Belle McLeary for filming and photographing the event.

A very special and enormous thank you to Mark Reid, Head of Education at the BFI for his continuous support and help.

We asked a few of our guests what they thought:

‘ The whole event was amazing..’
‘Best event ever, 10 out of 10..’
‘The event was very professional, everyone involved should be proud…’
‘Today was so awesome..’

You can view all films on the MTR online channel

‘…meeting industry professionals who know what it is like because they worked hard to get to where they are . . .it really gives me hope that I too will and can succeed’

The films are now finished, a short drama and documentary. On Saturday the young filmmakers did a preview screening to their mentors  and film Producer Stella Nwimo, who gave them an insight on the role of the producer and information on how to market and distribute their films. 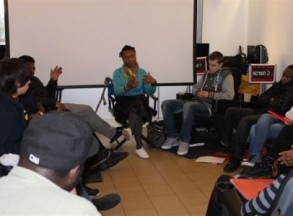 ‘What a great group of young people you have working for you!  keen, committed and hungry to learn, all the attributes you need to move ahead in what is, as we know, a hugely rewarding but challenging industry.  I wish there had been something like MTR when I was starting out and a place to go where you can not only ask questions but also feel that working in the industry is really attainable and not just an impossible dream’ Kolton Lee, Drama Mentor
Checke out….I Trust You
Check out….Underage Tattoos
‘I Trust You’ is a short drama  about two best friends Chantelle and Kate. Chantelle entrusts a very important task to her friend Kate, who proves that in times of need and desperation sometimes we don’t always behave in the right way.

‘Underage Tattoos’ is a documentary following 3 young people and explores their reasons for getting a tattoo and what it means to them, even though they were under the legal age limit.

These films alongside the MTR musical comedy ‘Chicken Shop’ will be screened at 1pm on the 8th March in NFT1 at the BFI so if you would like to attend please contact us on 020 7729 2323 or email:  mouththatroars@btconnect.com to reserve your seats.

‘. . . from treatment to production to post production, our group achieved our aim’

‘I learnt how the film industry works …. how different roles in filming come together’

‘I gained a lot of experience and confidence’

The Journey – Behind The Scenes

Well, the BFI Film Academy crew have been working really hard and with having almost finished production they are now moving into post production to be ready for the preview screenings of their films on 15th February. Over the weekend the young people directed and shot scenes with well known actress Indra Ove and were out and about filming their documentary in a tattoo parlour and a cafe . . . all will be revealed . . . . here’s a sneaky peak at what they got up to . . . . 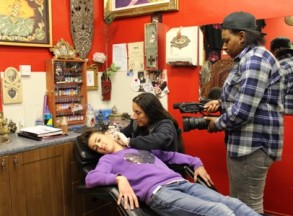 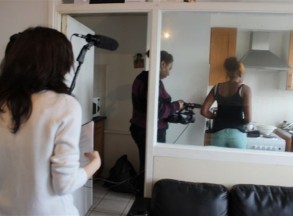 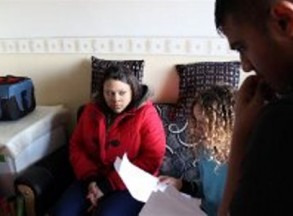 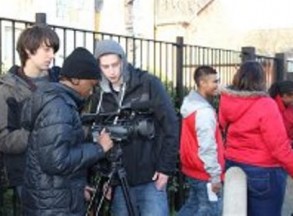 Over the last ten days the young people attending the BFI Film Academy have been participating in intensive workshops where they explored their drama and documentary ideas. The workshops were run by industry professionals such as grading artist and colourist Jet Omoshebi, Stunt Co-ordinator Clive Curtis, sound operator Ronald Bailey and lighting designer Gurshen Hussain. 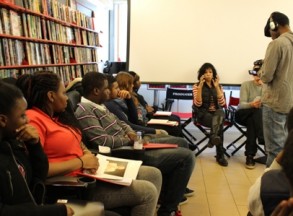 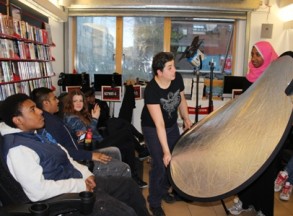 Having had the course kick off with an amazing start with film director Director Destiny Ekaragha, these further workshops with other talented experts in their field enabled them to learn more about different roles in the film industry as well as gaining valuable skills that will help them in producing their films.

They are still in the development stage so exciting times ahead . . . . . 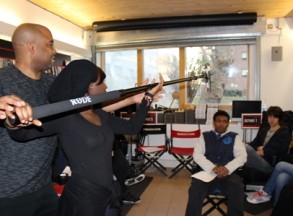 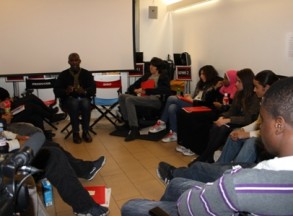 A few comments so far from young people….

‘I have learnt how to write a treatment in a team’

‘I have learnt a lot about back lighting and bounce and how lighting affects moods.’

‘I learnt that we need to work as a team’

‘I learnt how different roles in filming come together’

‘I’m learning skills of how to get into the film industry. I’ve never worked to make an idea visual and I want to be able to do that as it’s exciting.’

‘I learnt from Jet how much colour can have an impact and sometimes even change the whole concept of a film from normal to gritty and cinematic.’

Over the weekend the young people participated in various workshops from writing for drama, shooting for film and editing to producing documentaries. They also met with some of their mentors: Oscar nominated film editor Kant Pan, film director and novelist Kolton Lee, documentary film maker George Amponsah and cinematographer Derik Tan. 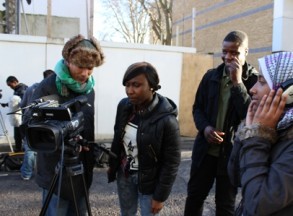 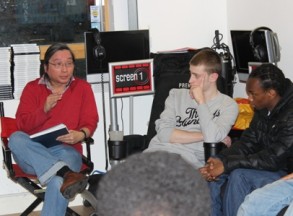 ‘BFI Academy has been amazing so far. I can’t wait for our brilliant ideas to start forming Team DOCUMENTARY!’ Ka-miller (Academy participant) tweeted.

‘The young people on this project are doing brilliantly well. They’re getting  the experience of working with cameras, they’re getting really good useful social skills working with each other and coming up with creative ideas and being collaborative and that’s really important to them developing the skills that will take them into the industry and make them able to get jobs . . . .they’ve got lots of talent, and lots of imagination.’ said Orson Nava, Filmmaker and Project facilitator.

We are in an exciting phase and are about to start producing a short drama and a documentary both of which will be premiered at the BFI,  Southbank . . . . . . . we’ll keep you posted so watch this space! 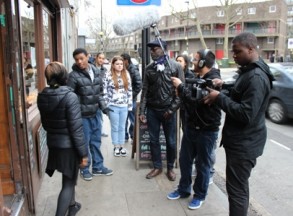 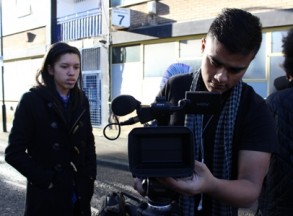 For more information check out