The young people premiered their films at the BFI, Southbank in London and what a successful screening – the young people really enjoyed the experience of seeing their film on a big screen.

The event was hosted by MTR Co-facilitators Riad Ahmed and Ka-miller Reid, Mark Reid the Head of Education at the BFI. Also attending was our guest speaker the British film maker, Kolton Lee who presented the young people with their ASDAN accreditations and gave inspirational feedback to all the first time film makers commenting that their films were ‘Really well shot pieces with great storylines and structure’. 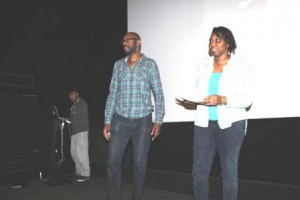 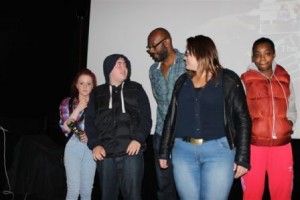 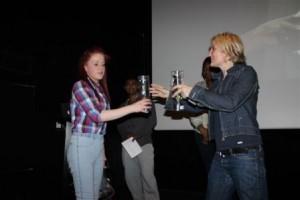 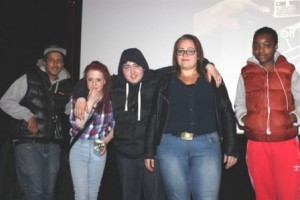 “Two great pieces of work, and so different.  Off the Wall is pure teenage comedy, fast talking, great timing, slightly bizarre, obsessed with food (and monkeys!), and Migration, as the title suggests, is full of quietly powerful testimony of the impact and challenges of moving country as a young person – and was especially poignant seeing it on European election day.”       Mark Reid, Head of Education, BFI

“It has been a wonderful experience for our young people to have collaborated on producing such a professional end result, from a brilliant filmmaking course. It’s great to see our young people engaging with professional film makers, in urban locations, getting their 1st hands-on experience with digital video cameras & sound equipment, to make a highly polished short film…”         Amanda Blenman Catch 22

“They have definitely gained a lot from realising that they can put their ideas into action and that people will listen and value their points of view. We hope their film is watched by many others, especially in the current political climate, so that more people understand what it is like to start a new life in this country”      Victor Ademosu  On Track ESOL programme

Kolton Lee, British film director, crime novelist and former journalist and editor of ‘The Voice’ and also one of our mentors, commented on the Into Film Project and the work that we do at Mouth That Roars:

‘I love the fact that your work is about opening up and demystifying the filmmaking practise and process to young people who wouldn’t otherwise have access.  as you say, unless we increase the diversity of practitioners it’s unlikely to see how we can make the culture of filmmaking in this country more inclusive.’

‘Migration’   and  ‘Off The Wall’  on our online channel   oureverydaylives.tv

The young people are now at the final stages of their film process. They have been filming on location in Tower Hamlets and are now on their  final edit. 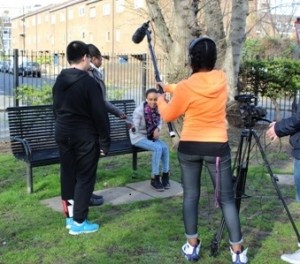 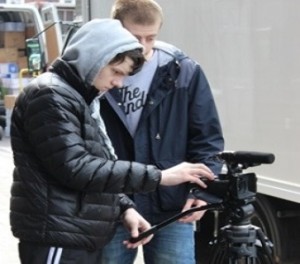 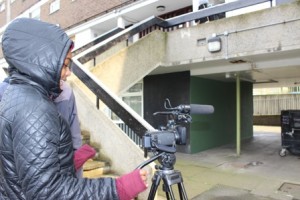 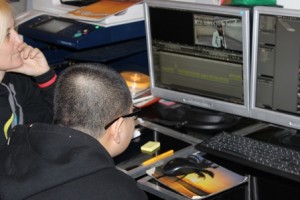 ‘Migration’ is a drama documentary following the lives of young immigrants in London from their perspective, highlighting some of the issues they face.

After the edit the young people involved will gain feedback from mentor Kolton Lee who will also discuss further opportunities with them. 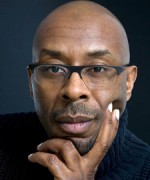 Kolton Lee is a British film director, crime novelist and former journalist and editor of ‘The Voice’. His credits as a director include ‘Freestyle’, ‘Blood’, ‘Cherps’, ‘American Mod’ and ‘Crucial Tales’. He has written for ‘Eastenders’, ‘Brothers and Sisters’ and ‘Byker Grove’. His credits as a Producer include ‘ Screen Nation Television and Film Awards 2007’,  ‘Blood’, ‘Cherps’ and ‘Living With Mimi’.

Both films are to be screened on May 22nd at 11.30am at the BFI Studio at the Southbank in London.

If you would like to attend please email mouththatroars@btconnect.com

We look forward to seeing you there!

Amongst the excitement and glitz of the BAFTA and Oscar ceremonies¸ this week also saw the launch of a new project at Mouth That Roars: MTR Into Film Project!

Young people attending MTR Into Film Project for the first time this week, made a fantastic start to their project by reviewing films and learning how to pitch their own film ideas. Next week they will be developing and scripting their ideas further… so watch this space!

MTR Into Film Project is part of Into Film’s outreach programme, which, in November 2013, commissioned projects all over the UK to develop opportunities for children and young people who are not in formal education to combine watching, making and understanding film.

MTR will be running weekly participatory film education and film making workshops over a 10 week period for young people aged 14-19 years old who have little or no prior experience of film training or education. MTR Into Film Project will support young people from disadvantaged backgrounds, by nurturing talent, developing knowledge and awareness of film and the film industry and building life skills. We are thrilled to be working with local projects, Hackney Ark, Catch 22 and Hackney Community College, to work with young people currently participating in specialised education schemes.

Into Film is a new charity born from the legacy of two leading film education charities, First Light and FILMCLUB and aims to put film at the heart of children and young people’s learning and cultural experience in the UK. 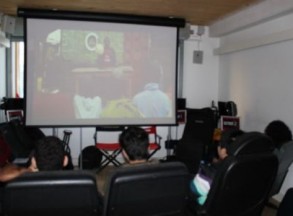