“When a young person uses media, he or she has an opportunity to produce alternative viewpoints that challenge generalised perceptions, creating new ways of seeing and being seen. Young people bring their own perspectives to creative projects, which in turn play a vital role in challenging common misconceptions about them and their communities.”

Mouth That Roars (MTR) is an independent, not-for-profit company set up in 1998 with the sole purpose of providing media projects & training in video production for disadvantaged young people. In 2005 MTR opened a unique media studio space, designed specifically for young people.

The company blends experienced youth and community practitioners, experienced media industry professionals and a unique hands-on facilitation style, which enables us to reach, engage and work alongside young people who often find themselves excluded from actively participating in society, due to various reasons that are out of their control. 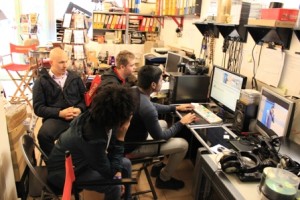 Also other tailor made workshops for commissioned providers. The Studio also has an extensive library of world cinema for young people to view. Our film workshops aim to raise young peoples’ awareness, by using film and documentary as a tool to explore Citizenship, Children’s Rights and Identity. Discussion and debate is encouraged within the group and participants are encouraged to define and analyse their own reference points, in order to challenge any preconceived ideas and develop a deeper level of understanding of themselves and others.

MTR has worked with young people & organisations all over UK. Such as Barnardos, National Children’s Bureau, Open University, Children’s Right Alliance for England – Some of our work

Our film commissions range from 1-2 day consultation projects to 3-6 month film projects. These projects are varied, but our outcomes are geared towards supporting young people to gain filming skills, develop a deeper understanding of the issue they’re tackling and to develop valuable life skills. Through the process of film training, we aim to raise awareness about young people’s lives. To challenge negative mainstream opinion that is often generated by the media and can be negatively internalised by young people.

MTR place’s as much emphasis on the youth work process of working with individuals & groups, as to facilitating a professional film product created by young people.